ASMR Sounds In A Storm Video Is Up And Running.

You're not a purple frog.


Hello everyone.  I wanted to write this after seeing some of my asmrtist friends getting down about the kinds of comments trolls (or just malicious people in general) can leave.  This entry is not just for asmrtists though---it's for anyone who has gotten down after being called names, or labeled by another person. If you watched my Draw My Life video, you know that I grew up with a terrible person.  This person tried to do everything he could to break my soul (and my mother's as well).  One of the things he used to do was yell curses at me, and call me names.  It was hard for me to understand why someone would be so cruel---especially someone who I never harmed.  It's easy to take on feelings of guilt or inadequacy when someone is trying to groom you into feeling less than you're worth.

I'd like to share a conversation I had with my mother that has always stuck with me. One day my mom sat with me when I was feeling down.  This is what transpired:

My mom asked, "What if he called you a purple frog?  Would you care?"  I said "no."  She asked "why?"  I said "Because I'm not a purple frog."  She said "So why do you care about anything else he says?  You know what you are.  He can't make you be anything else, unless you believe him."

It can suck when people make it a point to try to get under your skin, or hurt you.  It is important to remember that these people, who have nothing constructive, helpful, or valuable to offer, don't deserve relevance.  They can say whatever they want---and sometimes they will---but only you can give them the power to matter to you.  Don't give them that.  You are who you are, and no one can turn you into something else.

I know it's easier said than done, and there is a lot that we have to navigate with sometimes---especially if the hurtful things people say to us are rooted in our pasts.  It doesn't matter how old we get, scars stay with you.  At some point, it is my hope that you will be able to look at them, and instead of seeing an injury, see evidence of survival.  They're battle scars.  They're there to remind you that you made it.

You're not a purple frog---and you'll never be a purple frog, unless you give someone relevance they didn't earn, and power they don't deserve.  But you are a warrior.  You've made it this far, and you'll get even farther---because you can.   You have it in you.

Happy Thanksgiving, everyone.  Be safe.  I am thankful that you exist.

Sneak Peek of the Next ASMR Video 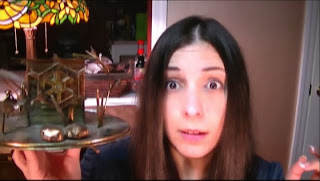 This is a screen cap from an upcoming sound assortment video  Just about everything goes wrong in it, hahahaha.

PS. Thank you all for being so patient with me about getting back to comments. It's been a busy time for me lately, and I have been trying to juggle real life and continue my posting schedule on youtube. So far I have been successful, but I have fallen behind with comments. I appreciate how supportive you all are, and I thank you for being cool about my response time.
Posted by Unknown at 2:14 PM 1 comment:

You guys know I have a thing for art.  It's special because only one person can make what they do, and feel the way they do while making it.  It's one of a kind.  Art is like fossils to me.  I am not sure that will make sense to anyone (unless they understand how I feel about fossils).  I guess the best way I can explain it is, art is a marker in someone's life.  It's proof of their time, and thoughts, and it could only come from them.  It means they existed, and this was something that resulted from them being in the world.

I have wanted to make this entry for a while now, but kept getting sidetracked.  I would like to share some proof of existence in art form from wonderful people (it sounds so weird to say it that way).

The background of this blog (and my banner on youtube and facebook) is actually a gift of art from a wonderful woman named Celia.  It was the first piece of art I ever received as a content creator.

They gave me permission to share it with you, so I am.  If any of you create any depictions from my story, I would LOVE BEYOND LOVE to see them.  That story meant a lot to me, and these pictures do too.


Two awesome ASMRtists---SavannahsVoice and Paul Artwork--- have made videos of their pieces (so you can tingle and watch them create):


I have also had some wonderful friends on facebook make pictures that skewered my heart: 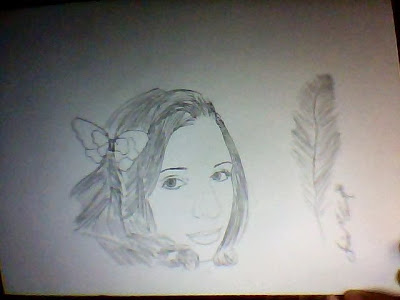 Another very talented ASMRtist made a painting for me of Sailor Jupiter (my favorite Sailor Senshi).   Sailor Jupiter is rather dear to me for many reasons---I related very much to her character in "Sailor Moon," so this gesture really touched my heart.

If any of you have art that you've done that you would like to share with me, I would be very happy to receive it.  They are like treasures to me.  If I posted your art here, and you would like your name with your piece, please let me know---I didn't know if people wanted their names on here, so if you did, I would be happy to edit this and credit you.  Thank you to those who shared with me---you don't know how dearly I hold these.

Hey everyone.  I wanted to let you know that Youtube is rolling out some crazy changes---one of which, concerns comments.  Youtube is not allowing me to reply to nearly all comments on my videos.  Most comments do not even have a reply option.  From what I understand, all comments from before the 7th are readable only, and even the ones from the 7th are not all available to me.  The "in reply to" link (that would normally allow you or me to see what someone is responding to) is completely useless.  Also, we are no longer getting comment notifications in our inboxes.  Basically, Youtube just made it a lot harder and less efficient for us to interact with our viewers.

I want you to know that even though I cannot respond to the majority of them, I did read your comments, and I truly appreciate them  Please bear with me as we go through these Youtube changes together...I hear it's going to get a bit more hairy this week.

Holy moly this one was a lot of work.  It should be up tomorrow, it is currently rendering (so what I am late for Halloween...I am SUPER early for Halloween 2014  :P)   I thought about scrapping this one so many times.  I got really deep in thought while constructing it---I actually wrote a paper for myself while working it out (I'm not joking).  It didn't go exactly how I wanted it to, and I felt it was campy (haha, campier than usual).  I almost deleted it a bunch of times, but after a while, I decided to embrace it for what it was.  I even added some sound effects that added to the camp level (while cackling to myself).  I don't know how successful it's going to be triggering people, but I really hope that it still works despite the contemplative story line.  This one is definitely a different pace than my other role plays, and frankly, I am nervous about the reception.  The goal was to make you think, make you tingle, and make you sleepy.  Fingers crossed I can do one if not all of them.  Here is the last hint:

Other hints have included:  Harvey Dent Plaza, Cloud and Sephiroth, Jaegar and Kaiju, and this

Looking forward to catching up on comments once this one is out.  Goodnight and Good morning (depending on where you're from)  Gah I'm nervous about it.
Posted by Unknown at 4:07 AM 5 comments: